Recently approved legislation and ambitious projects developed by Florida's transportation agencies, in collaboration with a variety of stakeholders and partners, are creating a wide set of options for testing autonomous and connected vehicles in the Sunshine State.

In 2016, state lawmakers passed a bill allowing the testing of autonomous vehicles on public roads without the presence of a driver in the vehicle. But not all manufacturers and suppliers are ready to test on public roads. To meet the need for testing in a controlled environment, Florida's Turnpike Enterprise and its partners are creating a test facility, SunTrax, located halfway between Orlando and Tampa.

SunTrax will create a multifaceted environment for a wide variety of test applications, from tolling to Connected and Autonomous Vehicle technologies. Construction began in 2017 on the first phase of the project, a 2.25-mile high-speed oval track with 5-lane mile-long straightaways containing buffer-separated dynamically tolled express lanes, which are increasingly being placed into operation around the country.

SunTrax also will include four toll gantries on the track with full fiber-optic connectivity, providing the agency with a location to continue testing toll technology. This testing will ensure that the state's toll facilities, which process over 1.3 billion toll transactions annually, are efficient and reliable. 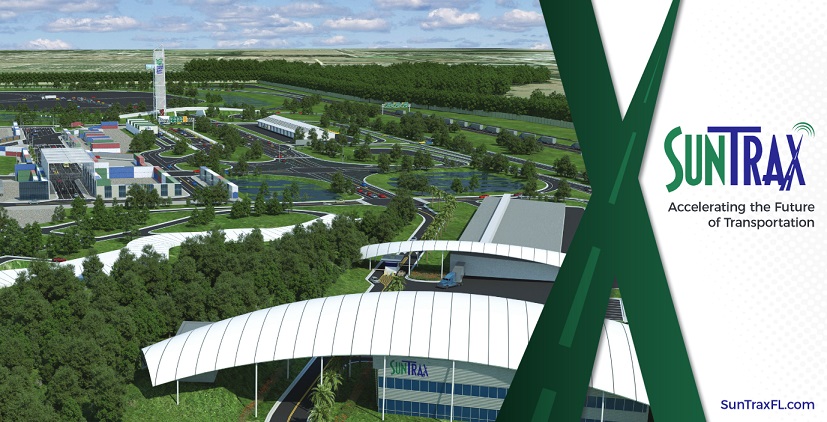 Phase 2 of the SunTrax project will build features in the infield of the facility to test and develop CAV technologies, and will include infrastructure such as:

■ An urban environment where chaotic and difficult to navigate combinations of signing, pavement markings, on-street parking, and both vehicular and pedestrian traffic will be simulated.

■ An enclosed environmental chamber where different weather conditions such as fog, smoke, and rain, as well as signal interference conditions can be precisely controlled to determine the limits of camera, radar, lidar and GPS technologies.

■ A roadway geometry track with complex and irregular horizontal and vertical curves.

■ A large and complex signalized suburban intersection with over 150 potential movement conflict points and a large re-configurable roundabout.

■ A pick-up and drop-off area with situations similar to what might be encountered at airports, multi-modal hubs, and other curb-side city settings.

SunTrax is part of the larger Central Florida Automated Vehicle Partnership. In 2017, the partnership was selected as one of ten federally designated proving grounds in the U.S. The partnership offers a comprehensive approach to the development and deployment of emerging mobility solutions across Central Florida by providing the three necessary components — simulation at the University partners, closed testing at SunTrax, and eventually open-road deployments on public roads.

"Florida has consistently been at the forefront when it comes to transportation technology and industry-leading ITS projects. SunTrax shows the state's commitment to further extending that leadership," said Josh Pedersen, HNTB Corporation, SunTrax Project Manager for Florida's Turnpike Enterprise.

The SunTrax facility is located adjacent to Florida Polytechnic University, a long-standing partner to Florida's Turnpike, and Florida's only public university dedicated solely to science, technology, engineering and math curriculums.

Not only will data and test results be generated, but the next generation of professionals are receiving hands-on training in the AV laboratory space.

"This is the future of transportation, so we're preparing students to be comfortable in this new world and be ready to advance it," said Dr. Bushey.

SunTrax is poised to become an international hub for the research and development of automated and connected vehicles and other emerging technologies, bringing significant opportunity for local business development and growth to Central Florida.

The first phase of construction will be complete in spring 2019, and the infield is currently scheduled to open shortly afterward in early 2020.