Analysts may disagree on the timeline, but they are united in the opinion that some form of self-driving car will eventually traverse America's roadways. And while most drivers have yet to experience a fully autonomous vehicle, they are already forming strong opinions that could impact the future of this emerging technology.

Those views, according to AAA's research, are conflicting and indicate a need for increased consumer education on autonomous vehicles and related technologies. In 2016, AAA found that three-quarters of U.S. drivers reported feeling afraid to ride in a self-driving car. Despite an increased focus on autonomous vehicles, especially in the media, the same study conducted in 2017 found that consumer fears remained unchanged. Furthermore, 54 percent of drivers said they would actually feel less safe sharing the road with self-driving cars, despite the fact that human errors contribute to more than 90 percent of crashes. 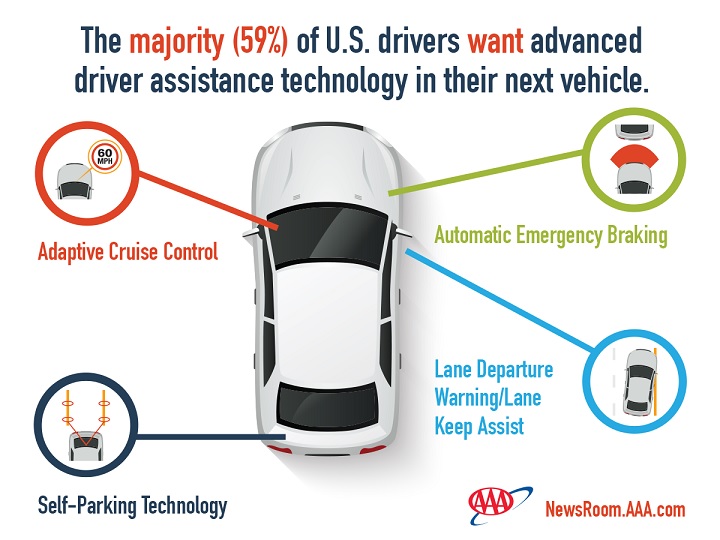 Many of the building blocks towards fully self-driving cars are already in today's vehicles in the form of advanced safety features like adaptive cruise control, automotive emergency braking and lane keeping systems. AAA believes that these systems hold great potential to help reduce the number of traffic crashes that occur on our nation's roadways.

Interestingly, regardless of fears surrounding fully autonomous vehicles, AAA found that 59 percent of U.S. drivers are eager to buy or lease vehicles equipped with advanced safety technologies. This marked contrast suggests that American drivers are ready to embrace some autonomous technology especially if it enhances safety and/or convenience. Eighty-four percent of drivers who want advanced technology cite improved safety as a reason worthy of paying extra for these features. Baby Boomers, in particular, value lane departure and lane keep assist systems, followed by adaptive cruise control and automatic emergency braking. Millennial drivers appreciate the convenience of automation and are more drawn to adaptive cruise control and self-parking systems.

However, not all drivers are ready to embrace these new features. AAA found that a lack of trust in the technology is the primary reason that drivers shy away from advanced safety technologies, while others report having higher confidence in their own driving skills. Concerns over the newness of the technology, the extra costs and a general lack of understanding of how the systems work are also preventing many Americans from embracing new technologies.

As automakers press forward in the development of fully self-driving cars, addressing concerns that prevent drivers from accepting existing technologies may be necessary to overcome the current state of hesitation. Manufacturers can help bolster confidence and gain widespread acceptance by ensuring that vehicle technologies are easy to use and understand and perform consistently and in a manner that improves the driver experience.

In the end, it is critical that consumers become more aware and trusting of the new vehicle technologies – or the adoption of autonomous vehicles may face an uphill battle. AAA is committed to remain engaged on the issue through research, testing and consumer education to help ensure that this significant shift in mobility, whether in 5 years or 50 years, occurs as safely as possible.