More than half of Americans (52 percent) believe they are familiar with or knowledgeable about autonomous vehicles (also referred to as self-driving vehicles), according to a new HNTB America THINKS national public opinion survey.

HNTB’s latest survey, Sharing the Road with Autonomous Vehicles-2019, found that among those familiar with autonomous vehicles, 58 percent believe they will be commonplace on America’s streets and highways within 10 years. In addition, 57 percent of this group are willing to ride in them, and slightly more than half (51 percent) believe they are safer than people-driven vehicles. 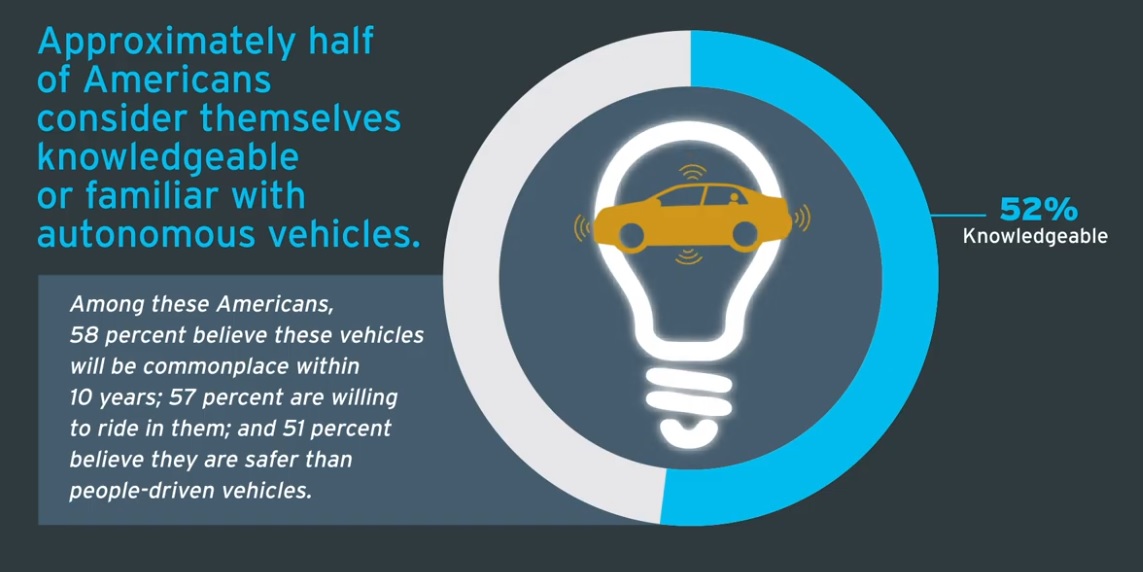 “As we become more knowledgeable about, and comfortable with, autonomous vehicles, people will begin to recognize and value the economic and social benefits offered by these technologies,” said Jim Barbaresso, HNTB’s Intelligent Transportation Systems National Practice Leader and SVP. “For example, people who are disabled or elderly and unable to drive themselves, will experience the freedom and convenience of mobility. Autonomous vehicles will help improve safety for pedestrians, bicyclists, and other vehicles. And they offer the promise of more effective management of roadway congestion.”

The HNTB survey also asked Americans what they would do while riding in an autonomous vehicle instead of driving themselves. Two-thirds of respondents (66 percent) believe they will most likely spend their time looking out the windows of their vehicles. Texting or talking is the next more likely activity according to 42 percent of respondents, followed by watching movies or playing games, 29 percent. Twenty-five percent believe they will sleep. Only 17 percent of respondents said they would work.

“The thought that people will be more productive during their ride in an AV may not come to fruition,” said Barbaresso. “Instead, it appears that most people will use that time for leisure purposes. Nevertheless, the freedom offered by autonomous vehicles could have impacts on urban design and residential life. For example, traditional housing patterns may be disrupted if people decide to live further from their jobs because rather than driving, they can use their commuting time for other things such as communicating with others, entertainment or work.” 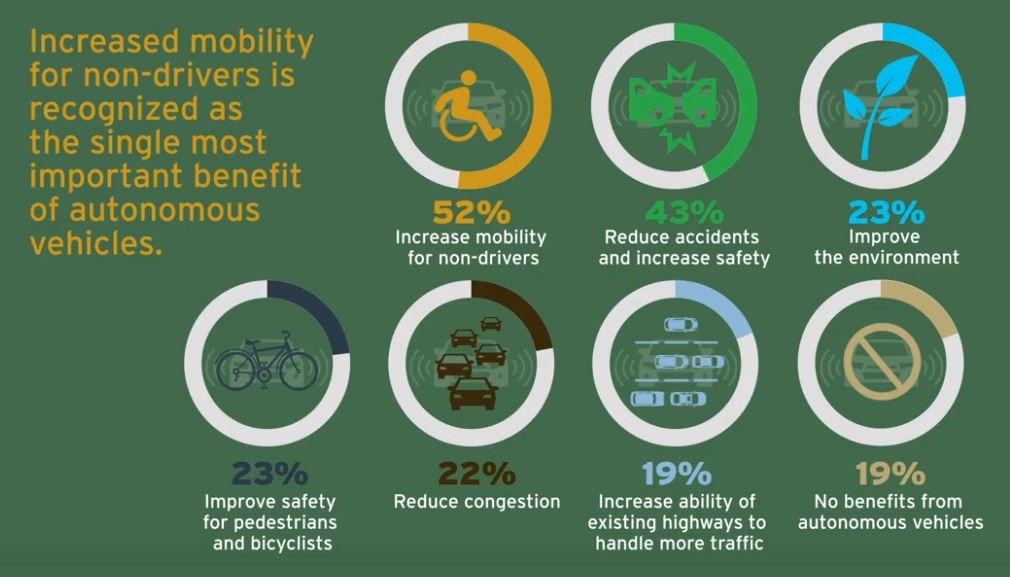 HNTB’s survey also found that among all survey respondents, an overwhelming 91 percent believe autonomous vehicles should be required to have a person on board who could override the automation in the event of an emergency. Privacy concerns associated with the data generated by autonomous vehicles was cited by 63 percent of respondents.

“There are continuing concerns about how the immense amounts of data produced by autonomous vehicles will be managed, by whom, and the potential impacts that this could have not only on privacy but the ability to insure the safe operation of these vehicles altogether,” Barbaresso said. “It really comes down to trust – does the public trust automated vehicle technologies? The level of trust will likely increase as the technologies supporting automated driving become more mature and commonplace.”

Additionally, liability in the event of a collision was identified by 56 percent of respondents as the single greatest concern associated with the implementation of autonomous vehicles, followed by cybersecurity/potential to hack the vehicles (53 percent). The cost of updating existing infrastructure to safely support autonomous vehicles was noted by 44 percent of respondents.

“The evolution of autonomous-vehicle technology is likely to change the look and feel of our roadways and cities as well as transform our concept of mobility,” Barbaresso concluded.