Connected and Automated Vehicles Can Put Traffic Accidents in the Rearview Mirror for Good
March 01, 2017

Over the next 30 years, millions of people will die in car crashes in the United States. We now have the technical capability to save those lives. Vehicle connectivity and automation are poised to exert a dramatically positive impact on the future of transportation safety and American cities.

According to Distractify, an entertainment company for the mobile era, 4.3 years of our lives are spent driving. While behind the wheel, we shave, apply makeup, talk, text, eat and read.

While it is necessary for us to keep our eyes on the road, hands on the wheel and minds on the task of driving, it may not be the case in the future. We are on the cusp of a transformation in transportation, driven by advances in vehicle connectivity and automation. This transformation will have a dramatic effect on our lives.

In congested highway traffic, drivers may not see a car braking hard several car-lengths ahead. But connected cars, communicating wirelessly with vehicles around it, will sense the abrupt slowdown, alert otherwise unaware drivers and assist them in stopping their vehicles before collisions occur.

Similarly, vehicles connected with traffic infrastructure will alert drivers who approach red lights too fast and automatically will apply the brakes before the vehicle runs a stoplight.

That is welcome news to Americans. According to an America THINKS survey by HNTB, most Americans are eager for technology enhancements that will improve their transportation safety. In fact, the majority (52 percent) believe the most important function of technology is to reduce accidents or make conditions safer. 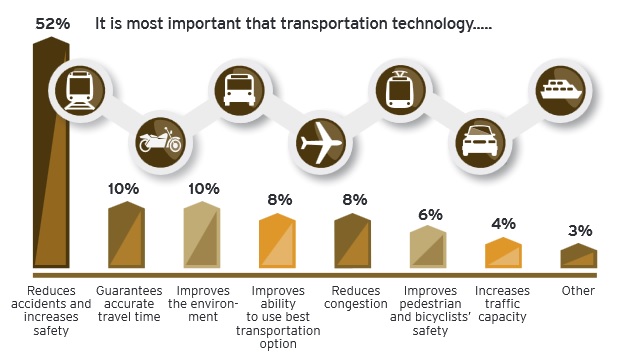 Automakers now are introducing advanced sensor systems that involve video, radar and LiDAR, a laser-based technology that continually and accurately scans and maps the environment around a vehicle. Cars with vehicle-to-vehicle connectivity and highly automated features, such as lane-keeping and cooperative adaptive cruise control, will be in showrooms by the end of the decade. Many of these features already are present in today’s cars.

The mission of combining vehicle connection and automation? Total elimination of all vehicle crashes. While seatbelts and airbags protect vehicle occupants in the event of crashes, connected and automated vehicle technologies can prevent crashes from happening in the first place.

Automakers realize driver error accounts for nearly 90 percent of all highway crashes. Their goal is to build a car that does not crash by eliminating driver error.

And, Americans are for it. In the America THINKS survey, 71 percent of Americans said they want to see technology that will improve safety.

It will be a while before connected and automated vehicles are ubiquitous, and we drive traffic fatalities to near zero. But consider some of the other benefits that will be realized on this journey.

For example, if cars don’t crash:

• Vehicles can drive in platoons at high speeds with less space between them. Every traffic lane in a congested city can carry three times its current capacity.

• Cities can reduce lane widths from 12 to 9 feet. That fits four lanes of traffic into today’s three-lane footprint and increases a highway’s capacity by 400 percent without purchasing an inch of new right-of-way.

• Shoulder space and the massive clear zones on today’s highways can be put to more productive non-motorized, pedestrian or economic use.

In addition, vehicle connectivity and automation likely will spark the most notable change to American cities since the advent of the automobile itself. Consider:

Most vehicles sit idle 95 percent of the time – a tremendous waste of a huge investment that requires endless parking spaces, lots and garages. As the shared economy becomes mainstream, automation promises greater opportunity for vehicle sharing.

If vehicles are used 95 percent of the time through sharing, then parking needs would plummet. Cars, trucks and buses could operate 24 hours a day, every day. Urban planners could transform parking lots and garages into parks, offices and pedestrian facilities.

The full benefit of safer, more reliable, predictable and faster vehicles won’t be realized overnight. But connection and automation offer life-saving, community-enhancing transportation advancements that the US government and US auto industry already have embraced — and cities should embrace, too.

hntb.com
CNN: Your car's data may soon be more valuable than the car itself
HNTB Joins the Vendor Forum