To pave the way for a nationwide deployment, a major long-term goal of the Connected Vehicle Pilot Deployment Program is for the connected vehicle devices and equipment to be interoperable, meaning that they would be able to operate as designed anywhere in the country, regardless of where they were built.

Accordingly, the USDOT and the Connected Vehicle Pilot sites (New York City, Tampa, and Wyoming) conducted a three-day testing event to prove the devices used at all three sites are interoperable. According to the USDOT, the event was a major success that exceeded the program's testing objectives.

The Connected Vehicle Pilot sites worked with the USDOT to develop a plan to conduct an interoperability test at Turner-Fairbank Highway Research Center (TFHRC) in McLean, Virginia from June 26 to 28, 2018. In addition to testing interoperability among connected vehicle devices from the three sites, the testing also served to identify potential interoperability issues that may require resolution prior to the sites advancing to an operational phase later in 2018.

Planning for the testing event was jointly led by the Connected Vehicle Pilot sites in coordination with TFHRC and USDOT staff. TFHRC and its Saxton Transportation Operations Laboratory contractor provided support to the Connected Vehicle Pilot sites as well as the facility and supporting equipment for the testing. This support included installing the same RSU models used by the sites to allow them to replicate their configurations, installing OBUs from the sites in vehicles, and providing trained drivers to operate the vehicles during the interoperability test runs.

In addition to the USDOT and sites, representatives of the Connected Vehicle Pilots' Independent Evaluation (IE) team were present to observe in support of the broader IE effort. Six TFHRC-provided vehicles were used for the testing with each vehicle being outfitted with an OBU from one of the Connected Vehicle Pilot site's OBU vendors -- Tampa (3), New York City (2) and Wyoming (1). Additionally, the sites each loaded the TFHRC-supplied RSUs with their own software.

A test of this nature involving three deployment sites, six device vendors, and multiple communications media had never been done before -- making the interoperability test a truly unique event.

In total, 102 interoperability test runs were conducted on TFHRC's closed road course for four test cases -- Forward Collision Warning, Intersection Movement Assist (IMA), Electronic Emergency Brake Light, and reception of Signal Phase and Timing/MAP messages. Data was downloaded off the OBUs immediately following each test run, with nearly 5 GB worth of data being generated over the test period. This data will be uploaded to the USDOT's Secure Data Commons for further analysis to help identify lessons learned that can be gleaned for future testing. 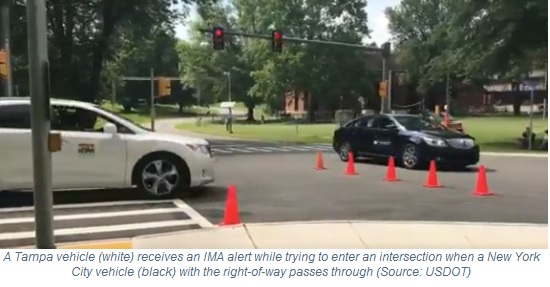 Overall, the three-day testing event was a major success that went above and beyond the event's original testing objectives, with time allotted on the last day for some impromptu tests by the sites. Results of the testing indicated successful transfer of messages between the six vehicles fit with devices from five different OBU vendors. Out of the five vendors, four utilized DSRC and one used both DSRC and SiriusXM Radio.

Additionally, equipment from New York City and Tampa's vendors demonstrated the successful transfer of messages between the site-configured RSUs and the sites' OBUs.

The event was lauded by many for being well-planned, well-organized, and well-executed, with some attendees reporting that it was the most successful connected vehicle testing event they had ever participated in. The interoperability test was a watershed moment for connected vehicle technology, and an important milestone in the maturation of these technologies for operational deployment.

A final test report documenting the results of the interoperability test is expected to be made available in Fall 2018.