In the next 10 years, as consumers move from vehicle ownership to vehicle usage, 48 percent of consumers surveyed say that a vehicle's brand would not matter as long as the vehicle is cost effective and convenient to access, according to Automotive 2030: Racing toward a digital future, IBM's new study on the future of the auto industry.

According to the study, consumers are putting less emphasis on automotive brands and more on access to vehicles and service when and where they need them most. Execs say that the ability of a vehicle to learn about its occupants, integrate with their devices and have a natural conversation with them will lead to greater brand eminence and loyalty. This presents an opportunity for automakers to redefine their brand differentiators by embracing open digital platforms, changing the way they work and accelerating reskilling efforts.

"Around the world, automakers are preparing for an industry in which less then 50 percent consider their brand to be a competitive differentiator," said Ben Stanley, Global Automotive Research Lead - Institute for Business Value, IBM. "In the next decade, as cars evolve into networked machines dominated by software, the concept of an auto brand may be facing a digital revolution that will require prioritizing in-vehicle digital experiences over driving features to separate from the pack."

Half of surveyed automotive execs say that to succeed or even survive in the next ten years, they need to reinvent their organizations with digital technologies, supported by data. In fact, 83 percent of exec respondents say they understand the strategic value of data in their industry. This data can fuel everything from operational efficiencies to new business models to the consumer-facing digital experiences such as integration with other personal devices, personalized services and the ability to connect into other aspects of a person's life. Yet only 18 percent of those responding say they are operating on a digital data platform today. 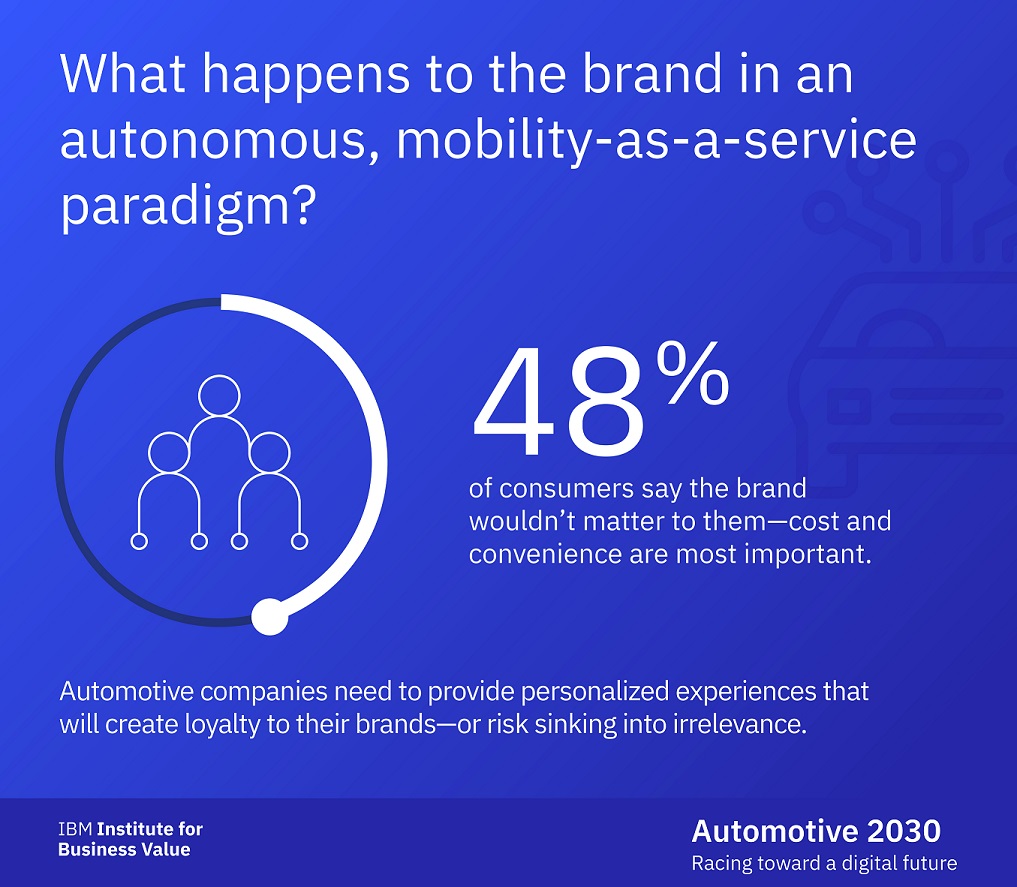 "Digital reinvention will power the automotive industry towards autonomous, connected, electrified and shared vehicles built on diverse platform ecosystems," said Dirk Wollschläger, General Manager Global Automotive, Aerospace & Defense Industries, IBM. "These ecosystems will be a mixture of technical, agile, high performance companies from multiple industries, each bringing their own specialization and value to the mix."

As the auto industry begins to build and inhabit digital ecosystems, it may also face new workforce challenges. When vehicles deliver personalized digital experiences and AI and autonomy are standard features, automakers must possess the critical new skills that will remake their workforce from top to bottom. With a direct workforce of over eight million people, the industry will need to spend over USD 33 billion in the next 10 years to bring them up to digital speed. To achieve this, executives expect training and reskilling budgets will drastically increase.

Methodology: IBM surveyed 1,500 automotive executives globally to determine what external influences are impacting the automotive industry today, and how they will change the auto ecosystem in the next ten years. Developed by the IBM Institute for Business Value (IBV), the Automotive 2030 study also surveyed over 11,500 consumers to better understand what they expect from mobile digital experiences.