Safety awareness is on the rise in downtown Tampa, as one of the first connected vehicle pilots is well underway. The Tampa Hillsborough Expressway Authority (THEA) began its project in 2015 as one of three participants in the US Department of Transportation's Connected Vehicle Pilot. Data collection started last spring, and early results are positive. The team has learned important lessons about what can be accomplished with a limited number of vehicle participants and the current state of GPS accuracy and timeliness.

The pilot uses several applications delivered via onboard units and human-machine interfaces in about 1,000 vehicles, 10 buses and eight streetcars, along with 46 roadside units installed in existing infrastructure, primarily at traffic signal controllers. 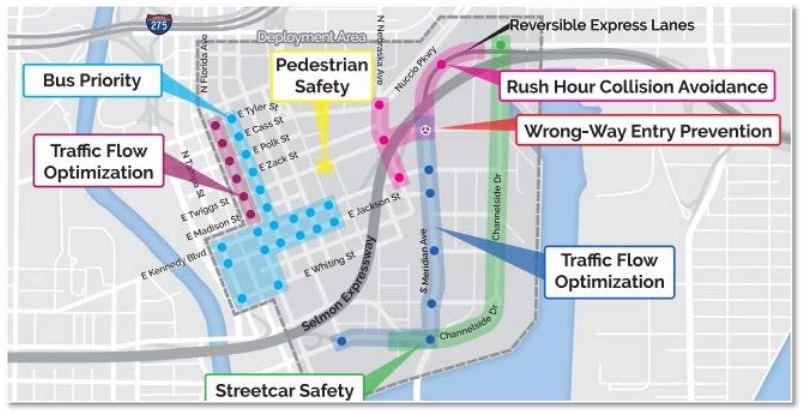 Early interest in the project among commuters was high, but participation slimmed down as practical considerations played out. More than 5,000 people raised their hands at the start, and we ended up installing the technology in about 1,100 cars. That translates into an average of 536 vehicles traveling in the study area on a regular basis.

During the first two-month measurement period after warnings began, we recorded 67 notifications. These are accomplished in two ways:

We have just begun to analyze the effects of the warnings on traffic flow and accidents. 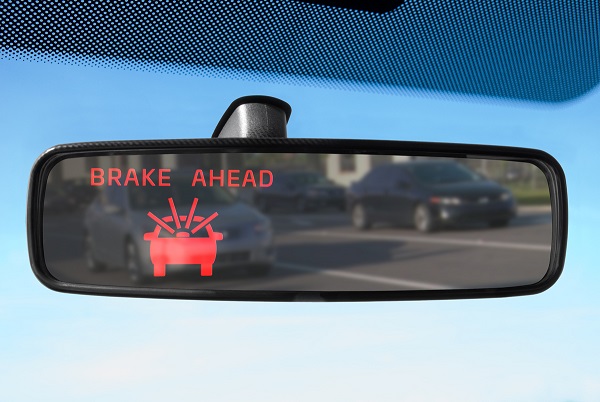 Bus and Streetcar Warnings Are Rare

Offering transit signal priority to buses seems to be working well. This is one of the simplest interfaces. Equipped buses automatically request priority as they approach intersections. The system determines if the bus is behind schedule. If the bus is behind schedule the Roadside Unit sends a request to the signal controller to extend the green light, but we didn't receive any requests during the initial study period.

For streetcars, the technology warns the operator when a vehicle is turning right at an intersection the streetcar is approaching as well as warning the vehicle driver. These situations are rare, however, and we haven't yet recorded any.

We have learned several lessons along the way, which will influence THEA's pilot results and future planning.

The first relates to the three pedestrian apps we planned to implement using smartphones. We quickly learned that the phones' GPS accuracy was not timely or precise enough to use for safety warnings, so we scrapped plans to test the pedestrian-to-vehicle and vehicle-to-pedestrian connections. We did change course and implement LIDAR – a laser location system – to map out the detail of crosswalk locations, track individual pedestrians in the crosswalk, relay that information to a roadside unit which sends the message to the onboard units and alerts drivers.

Two of the connected vehicle apps we're using depend on knowing the length of the queue at intersections, but we don't have enough cars in the study to get the quantity of data needed. As a workaround, we're using roadside cameras and radar to estimate the last car in line. We then control signals in a way that allows cars to continue moving rather than idling and keeps the “green wave” going.

This same ITS technology also is used to determine the end of queue when there's a backup on the reversible expressway. Drivers are provided recommended speeds as the approach the end of the queue.

Right now, with a low penetration rate of connect vehicles, we're relying heavily on traditional ITS to augment them. As connected vehicles become more ubiquitous, we'll rely less on roadside ITS sensors.

The THEA pilot is among several promising initiatives in the state and continues to position Florida at the forefront of CAV technology in our country.

According to THEA, one of its goals is to be a leader in bringing emerging technologies to bear to solve real issues. For example, THEA operates and maintains what was at the time, the world's first all electronically tolled reversible express lanes. It was the first agency in Florida to use image-based tolling, and it has expanded its vision to include being a leader in connected-vehicle technology integration.

In fact, local, state and national civic leaders who've seen THEA's pilot demonstrated are optimistic about its ability to save lives and improve the transportation experience. We'll soon have enough data to begin analysis of the pilot's success. THEA also has been considering what's next and has applied for grants that could expand the pilot and enhance it dramatically. We should have more information to share in early 2020.

The full potential of CV technology will become more evident as OEMs begin roll out integrated connected vehicles. Road operators will need to understand all the data they'll be receiving and sort out what's relevant. With this pilot, THEA is taking a significant step in that direction.

Bob Frey is Director of Planning and Innovation at the Tampa Hillsborough Expressway Authority, and Steve Novosad is Senior Project Manager at HNTB