The epidemic of traffic fatalities in the US numbers more than 35,000 each year. That’s more than 35,000 friends, family members and loved ones who die in accidents and other traffic-related occurrences, according to the National Highway Traffic Safety Administration.

With the vast majority (90%+) of accidents caused by human error, it is obvious why there is a keen interest by road operators and policy makers to address the issue. The mandate is plain and simple – we need bold and aggressive strategies to make our roads and highways safer.

As traffic technology moves forward, however, what should Americans expect? Is emerging technology truly safe, and how will it affect our lives?

To start, let’s look at where the industry is headed.

NHTSA has begun its formal rulemaking process for mandating connectivity in 100 percent of all new passenger cars by 2023 – a rule more than 15 years and $600 million in the making. NHTSA has also developed a draft policy for automated vehicles that lays the groundwork for safety and policy issues associated with these new vehicles.

The current focus is on self-driving cars that can completely remove the need for human intervention, and thus the potential for human error. Given the amount of attention and resources being poured into these technologies, a consumer-grade, fully autonomous vehicle will likely be available for purchase within the next five years. However, due to cost, policy and regulatory issues, adoption will probably not be widespread for another five to ten years after these initial vehicles hit the market.

We are, however, already seeing special use of fully autonomous vehicles in operation and the use of these vehicles by transit agencies and other organizations is expected to continue to grow over the coming years. Many of these will be eight- to 16-passenger shuttles that connect the first and last mile on transit systems, extending the reach of existing bus and rail service into neighborhoods. 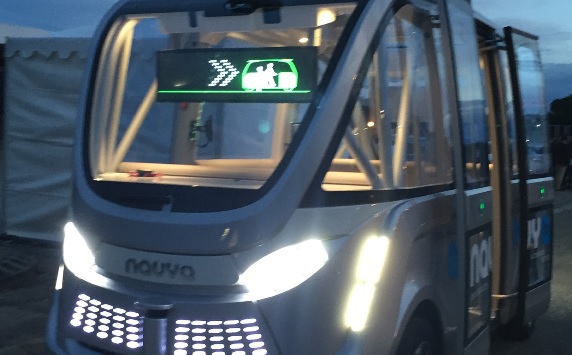 These vehicles also support specific developments, such as airports, college campuses and Town Center-type developments. These deployments may also include smaller vehicles operating in an on-demand mode on mixed-use road facilities where some of the policy, regulatory and insurance issues can be more closely controlled than in the general consumer market.

Impacts to Our Transportation System

Once widespread adoption takes place, automated vehicles have the potential to significantly reduce lane widths on our freeways and roads – we may not need 12-foot-wide lanes if vehicles can track in perfect lines.

The resulting increased efficiency of road pavement width could mean that a current two-lane roadway could be restriped to three, three lanes to four, and so on, increasing the number of lanes on a road without increasing the footprint of the road.

Similarly, the space between vehicles can be reduced, increasing lane capacity. Without a person behind the wheel, vehicles could operate safely at significantly higher speeds. The overall impact? By using our existing road network more efficiently, we will simply need to maintain the network instead of constantly expanding it.

Other impacts, such as parking and vehicle miles traveled, are going to be a function of vehicle ownership, which is still uncertain territory. Many people think no one will own automated vehicles, but users will share rides and vehicles, sparking “Mobility as a Service” on a grand scale. In this scenario, there are minimal needs for parking garages in urban areas, higher vehicle occupancy rates and other potential benefits.

However, if vehicle ownership doesn’t change because of automated vehicles, we have what the industry calls “zero occupant vehicles,” meaning our cars will drive us to work and then drive home, waiting in our garages to be called into service and pick us up. Cars would potentially be doubling the number of trips, and miles, they were taking previously.

Read Paradigm Shifts and Improved Safety - What Americans Should Expect from Automated Vehicles - Part 2, covering impacts on jobs and safety.

Greg Krueger, PE, is Program Director for Emerging Technologies in Transportation and Associate VP for HNTB Corporation, and Chairman of the Committee on Intelligent Transportation Systems of the Transportation Research Board.

hntb.com
What Americans Should Expect from Automated Vehicles - Part 2