The Governors Highway Safety Association (GHSA) projects an 11% increase in the number of persons on foot killed on US roadways last year, compared to 2015.

This would represent the steepest year-to-year increase since record-keeping began, both in terms of number of deaths and percent increase.

“This is the second year in a row that we have seen unprecedented increases in pedestrian fatalities, which is both sad and alarming,” said Richard Retting of Sam Schwartz Transportation Consultants.

Retting added: “It is critical that the highway safety community understand these disturbing statistics and work to aggressively implement effective countermeasures. The information in this report will help states and localities pursue engineering, enforcement and education solutions to reverse this trend.”

States reported 2,660 pedestrian fatalities for the first six months of 2016, compared to 2,486 deaths during the same time period in the previous year. Adjusting for underreporting and past full-year data trends, GHSA estimates an 11% rise in pedestrian fatalities from 2015 to 2016. Compared to 2014, the number of pedestrians killed in 2016 increased by 22%. Pedestrians account for approximately 15% of all motor vehicle deaths. 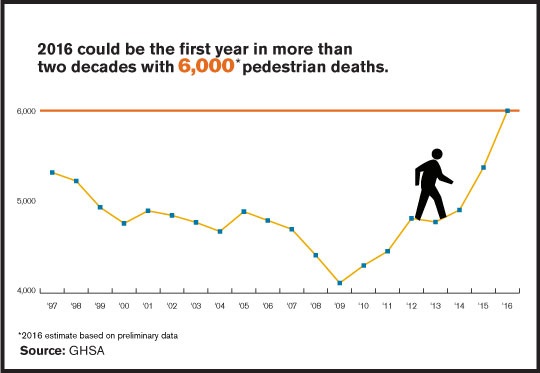 More than twice as many states reported an uptick in pedestrian fatalities in the first six months of 2016 than had decreasing numbers – 34 states saw an increase, while 15 states and the District of Columbia reported decreases, and one state had no change.

There are many possible factors contributing to this spike. As economic conditions improve and gas prices remain low, the US has seen an increase in motor vehicle miles traveled. At the same time, a growing number of Americans are choosing to travel by foot for health, transportation, economic or environmental reasons. Another potential factor is a sharp rise in the use of smartphones to send and receive multimedia messages, a frequent source of mental and visual distraction for both walkers and drivers. 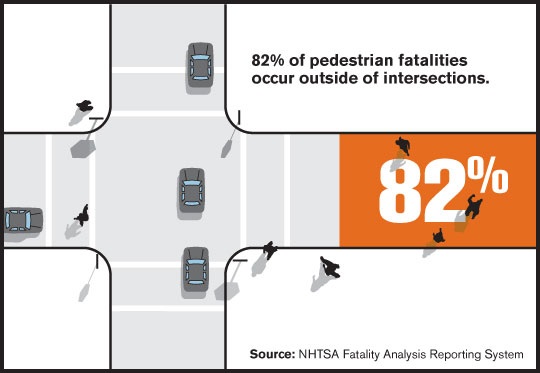 “Everyone walks, and we want to encourage that, but at the same time we want to make sure that we all get to our destinations safely,” said Jonathan Adkins, GHSA Executive Director. “Unfortunately, this latest data shows that the US is not meeting the mark on keeping pedestrians safe on our roadways. Every one of these lives represents a loved one not coming home tonight which is absolutely unacceptable.”

GHSA also asked its state members, which are responsible for addressing behavioral safety, to provide examples of their efforts to reduce pedestrian and motor vehicle collisions. Promising strategies include: high visibility enforcement and public information campaigns aimed at both motorists and pedestrians; identifying high-risk zones and conducting educational outreach in these areas; adoption of Complete Streets policies, which ensure streets are safe for all users regardless of mode, age and ability; and strategic partnerships with local universities and community organizations to advance pedestrian safety. State Highway Safety Offices also collaborate with state DOTs that are tasked with infrastructure improvements.

GHSA’s annual Spotlight on Highway Safety offers a first look at state-by-state trends in pedestrian traffic fatalities for 2016, using preliminary data provided by all 50 state highway safety offices and the District of Columbia. The report was authored by Retting.

Kara Macek is Senior Director of Communications and Programs at GHSA