Smart City Mobility Can Save 60 Hours Per Resident Per Year
March 21, 2018

Smart cities have the potential to "give back" 125 hours to every resident every year — with 60 of those hours from smart mobility — according to an Intel-sponsored study by Juniper Research. 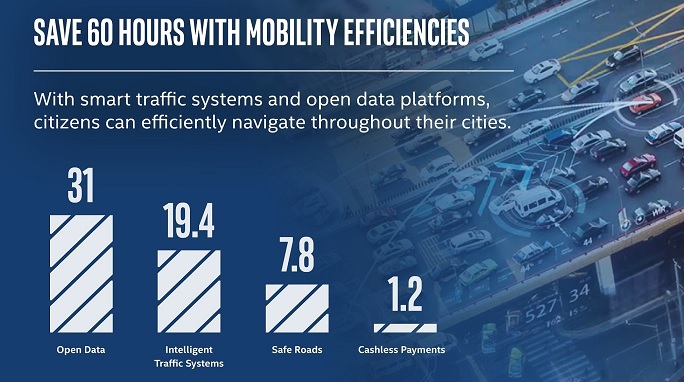 The average peak-time vehicle speed in cities is a dismal 4 mph. This gridlock causes drivers to lose up to 70 hours per year. The study determined an integrated IoT-enabled infrastructure of intelligent traffic systems, safer roads, directed parking, frictionless toll and parking payments can give back up to 60 hours a year to drivers otherwise stuck in their cars.

■ In many cities, the average peak-time vehicle speed is a crawling 4mph (6kmh).

■ The stress of the morning commute has been shown to be hazardous to citizens’ health. A study by the British Cardiac Patients Association in 2004 found that emergency call-outs for life-threatening heart attacks and strokes peak between 8am and 11am.

■ WHO estimates that 3 million deaths every year are attributable to small particulate matter pollution,a large portion of which is generated by vehicle emissions. High levels of congestion result in higher levels of harmful pollutants in the air.

ITS (Intelligent Traffic Systems) technology can be used to dynamically adjust traffic light phasing, with the aim of minimizing red light delays and smoothing overall traffic flow. Meanwhile, parking space availability can be used to inform drivers where the nearest available space is, minimising the time spent cruising’ for spaces.Juniper has calculated the time benefit based on a long-term outlook of an average commute round-trip of 74 minutes. Meanwhile, ITS are expected to have a 10% positive benefit over the baseline. In both instances, the figures used are the result of anticipated population rises leading to
greater pressure on infrastructure.

Singapore, San Francisco and London were found to be world-leading cities in addressing urban transportation challenges. Singapore, for example, has applied smart, connected traffic solutions,in conjunction with very strong policy curtailing car ownership in an effort to reduce the number of vehicles on its roads.
This level of policy enforcement is not possible in San Francisco or London; consequently, these cities have applied their own traffic calming technology solutions alongside long-term visions for transformative transportation paradigms in the form of MaaS (Mobility as a Service) and AVs (Autonomous Vehicles)

Trailing cities in this index include Yinchuan, Hangzhou and Bhubaneswar. The study found that, in spite of notable roll-outs such as Yinchuan’s pay-by-face public bus service, overall efforts to reduce congestion levels are at an early stage relative to the leading cities. For instance, public transport availability and uptake as a whole was found to be low, while key future urban transport innovations, such as shared transport solutions and AVs, were not found to form part of the cities’ long term vision.

Windsor Holden, Head of Forecasting and Consultancy at Juniper Research, said: “We can’t overlook the importance of the real human benefits that smart cities have. Connected communities, municipal services and processes have a powerful impact on a citizen’s quality of life.”